Maybe it was Tiger’s success at the Masters in Augusta or maybe it’s the weather, but Cahir Park members were out in strength this week. Everyday competition entries were high and every evening Bruen and Purcell panels were practising and the ladies Minor and Challenge Cup teams and their opposition are practising in Cahir Park.
On Sunday night the Ladies club held their annual bridge night which turned out to be a most enjoyable evening with players managing to keep an eye on Tiger and play cards!
The winners were our own Breda Ryan and Peg Butler in North/South and Leo Swift and Piotr Lisiac in East West. Ann Nolan and Jo Phelan and Peggy Rylands and Rosaleen Fitzgerald were second. Plans are being made to arrange again on Sunday afternoons in winter.

Tues 16th April
1st- Colm O Flaherty, Pat O Callaghan and Derek Runacres 38.9pts.
2nd- Arthur O Donnell, Sean Tierney and Tom O Dwyer 40.5 pts.
3rd- John Murphy, Noel Moloney and Liam Nelligan 406pts.
Seniors have a busy month ahead planned.
May 7 is Pottinger Senior Invitation day. This is where Seniors can invite a friend to play for €10. May 14 seniors are off to the Gold Coast.
May 21 Munster Seniors Open. Timesheet is PRO Shop.
May 28 Last but not least Senior men and ladies are running a joint scramble. All proceeds for gardening project at the clubhouse. This is a fun morning, so please mark the day in your diary.

On Thursday in the weekly Ladies competition, Linda Harris came first with 44 points and is delighted to have her handicap cut by 5 strokes! Linda has been playing some fantastic golf over the winter and is looking good for team selection in the future. This was the second GOY competition and I’d wager that we will see Linda’s name feature again. Caithlin Fitzgerald came 2nd with 36 and Ger Lyons was 3rd with 32 points.
Ladies Competition 20the & 21st April:
With the glorious weather last weekend we had a number of ladies playing in the weekend competition. Well done to Patricia Browne who came out on top with 35 points! She had 3 point more than the rest of the field. There were 4 members on 32 points with Caroline Maher in second with a count back and Marie Keating in third.
Mens Notes
This week we saw the second instalment of our weekly ABP Qualifier. Serving up a winning score and claiming a GPS Watch was Keith Mc Guire with an amazing 46 points. Michelin Star Golf from Keith! Then in second was Norman Jones with an impressive 40 points narrowly beating Ger Butler into 3rd on a countback. Francis Mc Carthy claimed gross with 28 points. All four qualify for the Grand Final in October. 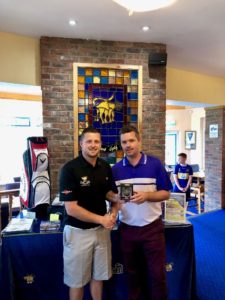 Moving to the weekend we held a 3 day event, from Friday to Sunday. It was our Golf Professional, David Ryan’s Prize. It was not just the sunshine that made this a hotly contested event! It was played from the blue tees. Taking top spot was Leonard O’Connor with a great score of 69, very good shooting. Coming home second was Ian Flannery with 71. Close behind him was Eamon Williams with 72. Well done lads, good golf!
This weekend from Friday April 26 to Sunday April 28 we will be running Open Foursomes Competition. Any combination and re-entry is permitted. This will be a great opportunity to practice for the following bank holiday Monday when we are holding our Mixed Masters Competition.
We would like to wish our golf Professional, David Ryan, the best of luck in the opening of his new shop at Clonmel Golf Club.
On Friday April 19 our Junior Foursomes played great golf in Clonmel and represented Cahir Park so well. Team pairings were Junior Captain Conor Kirwan and Luke Healy, Jake Linley and Carthach Leahy. Congratulations to Tipperary Mitchelstown who qualified for the next round.
Best of luck to our Ladies Minor and Challenge Cup teams who are playing their second rounds at home on Friday against Castlemartyr and Clonmel.

There were a huge amount of members that came out to enjoy the weather in a Mixed scramble on Easter Monday, our PRO David Ryan was playing with Lady Captain Marie & President Jim Cantwell – great to see so many familiar faces. In first place were household names of Emmet Leahy, Aaron Magee, Bernie English and Mag Tobin who shot 6 under with a 56.4 Nett. In second was a steady team of Luke Healy, Garry Morrisson and Kathleen Lonergan who shot a fantastic 8 under with a nett score of 56.8. In third was Francis McCarthy, Sean Duggan, Anne McLoughlin and Kieran Fleming with 57.2 nett and 7 under. There was a great turnout for this club classic and a friendly atmosphere in the clubhouse after. This was a great sign of our summer to come with everyone getting out and getting to know each other in the club. This competition was kindly sponsored by Jimmy Flannery Gateco. 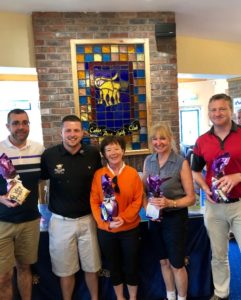