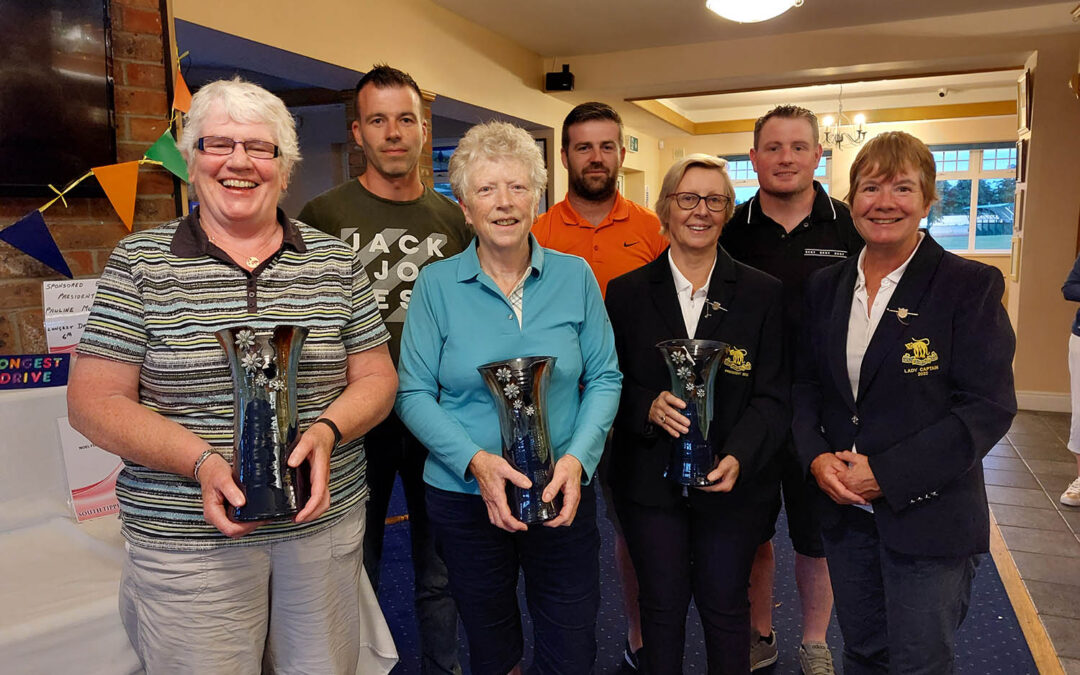 In the week of Irish successes in the European Championships,  Aga Khan Cup win in the RDS and qualification for Olympic games in Paris, Rowing Gold and Silver Medals and a multiplicity of Sports victories,  the Ladies of Cahir Park Golf Club were not found wanting.

Monday 15th August will long live in the memories and hearts of many.  The predicted weather forecast came to fruition and torrential rain, hailstones and wind from the Atlantic Ocean beat across the Barrow Estuary for the first hour of the five matches v. Tralee G.C Ladies in the Munster Final of the Mary McKenna Diamond Trophy.  The sand dunes of Tralee G.C. were no protection to supporters and no friend to golfers.  Thunder and Lightning lit up the skies across the bay over Ballyferriter.  However, the game of golf won out over the elements.  Our Ladies had arrived to Tralee 5 matches up.  The Kerry Ladies were not for giving in and well used to the conditions, they had success by the 17th Hole as night time fell.  Five All and then sudden death back on the 1st Hole.  A line of supporters from both Clubs gathered in the marran grass either side of the fairway to listen for the fall of the Golf balls as vision was zero at 21.25 after a thunderous six

hours of weather and golf.  Lady Captain, Margaret Gill and Susan Carey, exhausted and fired up from the 17th took on a rested pairing from Tralee.  Playing Foursomes, Cahir Park’s Drive, second and third shots all hit the fairway and were straight as could be. Tralee came out of the rough grass in the strong fashion they exhibited all afternoon.  Both Teams chipped on for four with Susan landing a beauty, approximately 2.5 feet from the flag.  The Tralee Ladies were further out and had a great putt that flowed past the flag slightly.   Margaret stood over the putt and straight into that tiny mighty hole.  Victory for Cahir Park and what celebrations in the dark!  Back in the Clubhouse,  Siobhan Saunders representing Mary McKenna and Woodenbridge G.C. congratulated both Teams on the two very sporting games played Home and Away.  Presenting Team Manager Ger Lyons and Captain Margaret Gill with the Provincial Pennant, Siobhan wished Cahir Park G.C. a very enjoyable weekend in Woodenbridge G.C. on Saturday 10th and Sunday 11th September in the All-Ireland Series Finals.

Having tasted semi-final success in 2014, the Ladies are excited and very keen to go one better in September.   Best wishes to Managers Ger Lyons and Margaret Costello and to the Mary McKenna Diamond Trophy Panel of Margaret Gill,  Susan Carey,  Mary Lyons, Kathleen Lonergan,  Chris Noonan,  Norma O’Brien,  Pauline Mulcahy, Miriam Halley, Kathleen Alton,  Noreen Hally,  Breda Keating, Imelda Fitzpatrick and thank you Ladies for the enjoyment you have brought to the Club.

Tuesday Morning dawned and the Cahir Ladies were out on the Course for another enjoyable Champagne Scramble well organised by Margaret Costello after a late night home from Tralee. 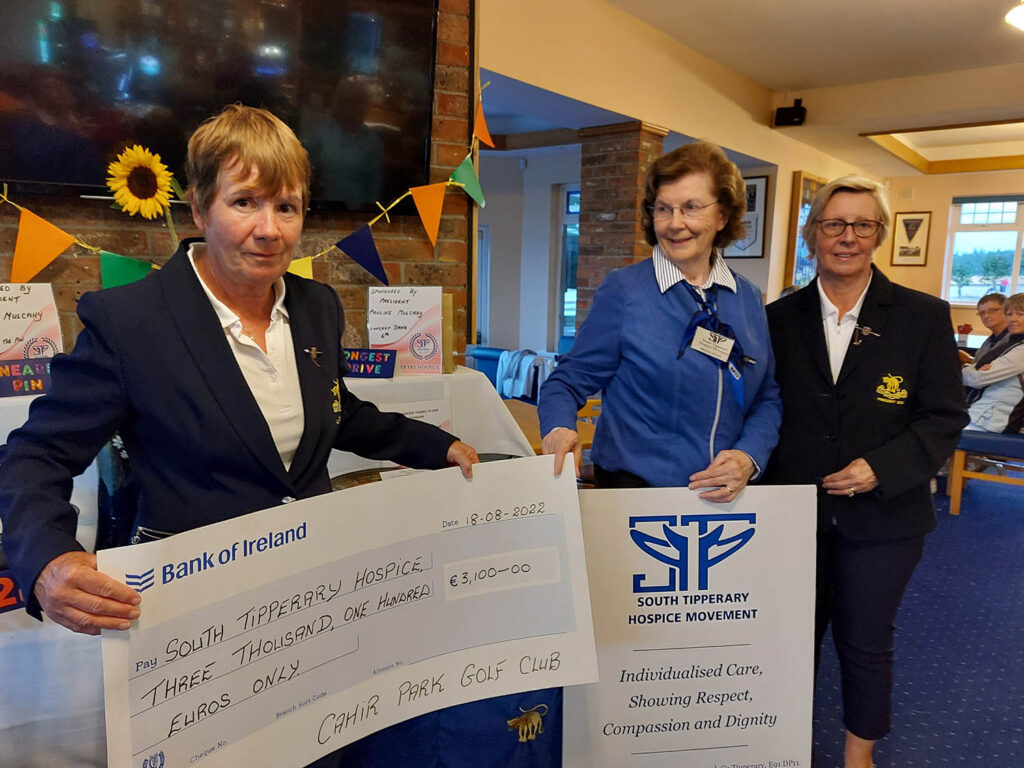 A very successful Ladies 3 Ball Champagne Scramble Open Day was held on Thursday 18th August.  An array of beautiful prizes adorned the prize table with great thanks to Noel Flanagan,  Cahir Carpets Ltd and Ned Grant & Sons Carpentry and Building Contractors who graciously and generously sponsor the Hospice Open Day each year.  The Day was well supported and Captain Margaret Gill presented Breda Ryan of South Tipperary Hospice with a cheque for €3,600.  Breda was delighted with the funds which she said will be put to good use for all the persons who are assisted by South Tipperary Hospice Movement.

Cahir Park Ladies Committee wish to thank Noel and Ned, all the Companies and individuals who sponsored Tee box signs, donated gifts for Raffle and all who contributed to the Raffle and supported and participated in the Scramble.

Best wishes to Emma Keating and Susie Burke who will represent the Club in the Final at Cork G.C. on 5th September.

Well done to the Cahir Park team of Deirdre O’Neill,  Julie Connolly and Mary Kenrick who represented Cahir Park last Wednesday.   While success was not to be,  the Ladies put up a strong contest among the 36 Teams who played.  Thank you Ladies.

Further success for the Cullen Cup Team who won against Druids Heath G.C. in the All-Ireland Ireland semi final on Saturday played at Baltinglass G.C.  The All-Ireland Final is set for this weekend against either Edenderry G.C or Druids Glen G.C., the result of second semi-final not available going to press!

Cahir Park won the Cullen Cup last year and the best of wishes go to Panel and Managers for a further win this year.

President Pauline Mulcahy is busy with preparations for her Prize Weekend.

Entry Sheet is in ProShop and Draw for playing partners will take place on Thursday 1st September.  Further details of President’s Prize next week.

The Mid-week ABP Open Singles Qualifier continued in Cahir Park last week from Tuesday 16th to Thursday 18th August in fine weather conditions. The winners in each category were:

The 18 Hole Open Singles Stableford took place once again on Friday 19th and Saturday 20th August. The winners in each category were: 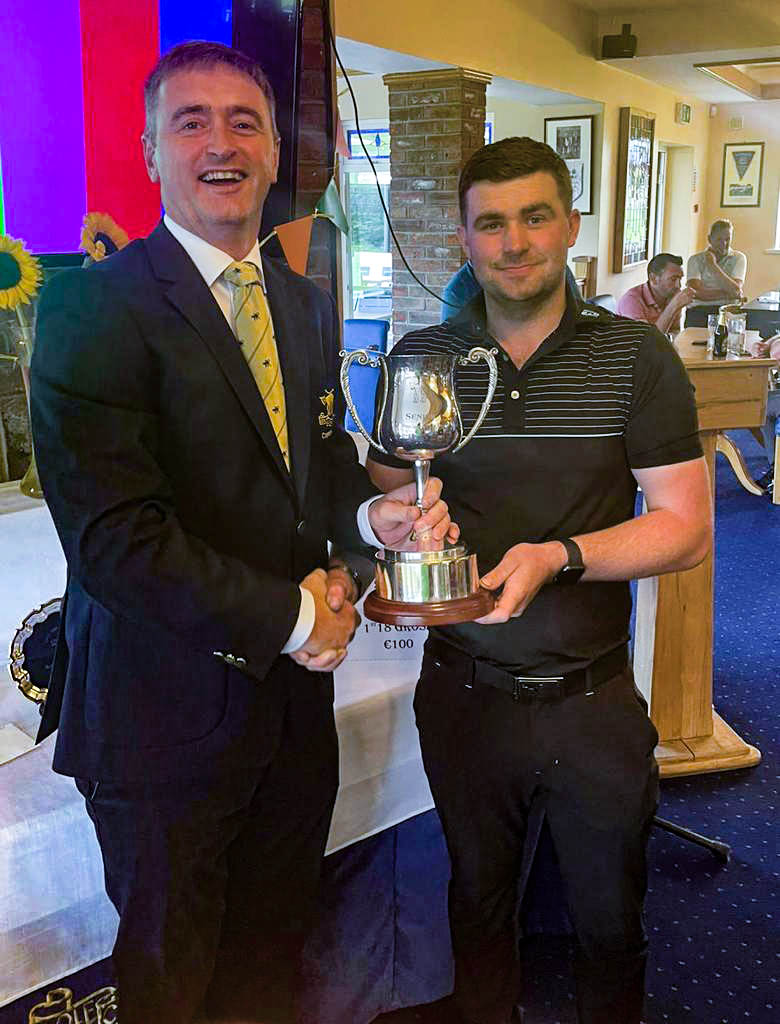 Congratulations to all the Senior Scratch Golfers who played, to the Prize Winners and to Captain Gary Morrison and Sponsors, Morrison BMW Cahir on a very successful day.  A further report on Senior Scratch Cup will follow next week.