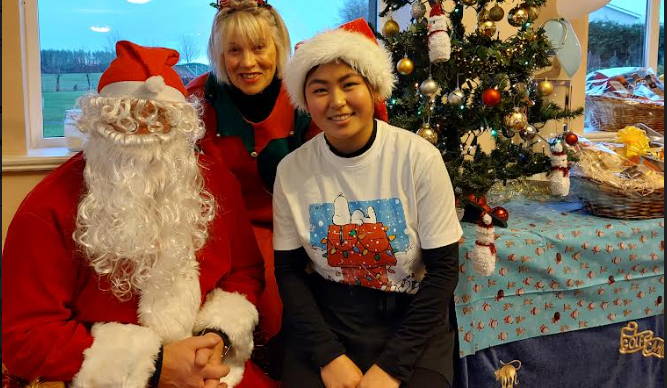 At the recent AGM of the Club, outgoing President, Pauline, wished her successor Paul a good and enjoyable year ahead.

Pauline thanked everyone who supported her in many ways throughout her year as President and she said it was her honour to represent the Club and Members during 2022 and congratulated everyone on good golf played, great Teams successes and thanked Team Managers and Panels.

Paul has previously served on many of our Club committees, is past Captain and Teams member and thanked Pauline for inviting him to become President for 2023.

Best wishes to both Paul and Pauline, good luck and thank you.

Following notification from a senior Elf, Santa made a surprise visit to the Clubhouse on Sunday,  but not before he had inspected the Golf Course for ground conditions as he advised Cahir Park will be a rest point on his long journey around the world next weekend and he does not want to do damage to the Golf Greens with his heavy sleigh.

Santa would not comment on the findings of his inspection.  He was, however, overcome by the welcome he received from the boys and girls gathered in the Clubhouse and though he disappeared magically after deep conversations about sleep and toys, he promised to return on Christmas eve with many surprises for all who have been very good this year.  Santa thanked Captain Mary Lyons and her team of willing Elfs together with Lore, Kay, Lian and Francis for the wonderful reception,  though the hot punch was a no, no, when in control of his Reindeer herd!

With Santa away on Sunday last, Argentina World Cup victors, Captain John Hughes welcomed all present in the Clubhouse and said he was delighted to present Paul Keating with his Golfer of the Year Prize.  Paul had a superb year of golf and was winner of President Pauline Mulcahy’s Prize in September.

The next presentation was for a recent Christmas hamper competition which was also the final round of golfer of the year.

The final presentation was made to Francis McCarthy who won the 2022 Club Singles match play.

Congratulations to all the prize winners.

With the Frost taking a pause for Winter, it is hoped all Golfers can enjoy the sport over the Holidays.

The Ladies will resume Monday to Sunday Singles Stapleford competition with entry and Re-entry.

Each and every member and extended family members are wished a very Happy Christmas and a Prosperous New Year.

Thank you for your commitment to and membership of Cahir Park Golf.

May you all enjoy good health and good golf throughout 2023.