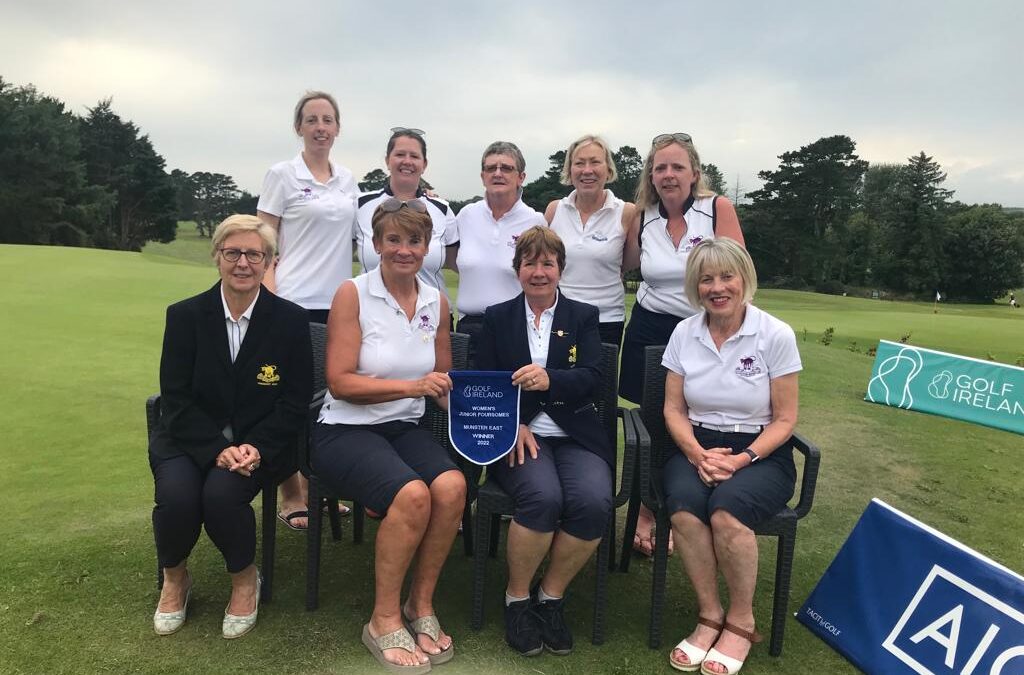 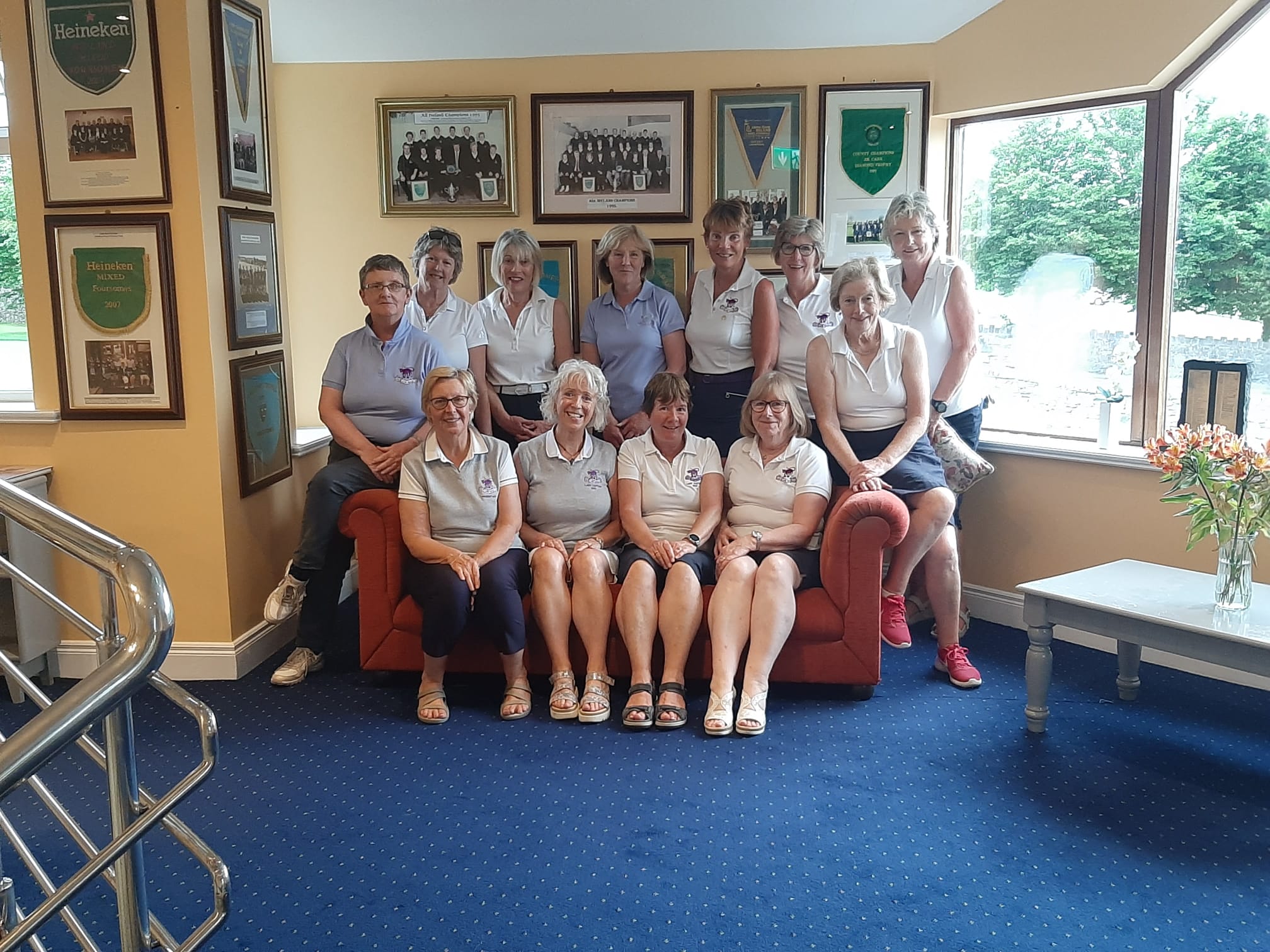 There was great sadness among Club Members when the death of Richie Downey on Tuesday 12th July was announced.  Richard was a long time member of Cahir Park and very active with the Seniors Group up to two years ago.  Very faithful to his Club, lovely stories of a kind man were recounted in the Clubhouse.  The Management Committee at monthly meeting extended sympathy to Mrs. Alice Downey and her Family.  Special mention to Richard’s Son, Billy,  who is a member of Cahir Park G C. Course Staff and daily works on the grounds his Dad knew so well.  Rest in Peace Richie, you will forever be remembered.

The Ladies of Cahir Park enjoyed a brilliant week of golf following the success of Lady Captain’s Prize Day on Saturday 9th July.

On Monday 11th July the Mary McKenna Diamond Trophy team welcomed Newcastle West Ladies for Round 3 of the Trophy competition.   Cahir Park Team of Margaret Gill & Susan Carey,  Kathleen Alton & Noreen Hally, Miriam Halley & Pauline Mulcahy, Mary Lyons & Kathleen Lonergan,  Norma O’Brien & Chris Noonan,  were the victors on the day playing excellent competitive golf against a very formidable Newcastle West team.  Excitement abounded around the Clubhouse as the Ladies of Cahir Park celebrated.  Team Managers, Ger Lyons and Margaret Costello began planning for the Munster Final v Tralee G.C. Ladies.  The Final has to be played out by 24th August and involves Home and Away matches.  A visit to the Kingdom is on after the Ladies of Tralee have stepped into the Premier County.  A very exciting Munster Final is on the cards for the coveted Mary McKenna Diamond Trophy.

Saturday 16th July was the day for Tramore, but not to the beach.  Golfers headed to Tramore G.C. which was resplendent on the day as the Club hosted numerous East Munster Finals sponsored by AIG Insurance.

Cahir Park Ladies Junior Foursomes Team were well prepared for the Ladies of Lee Valley G.C.(Cork) and played impressive golf in very warm conditions.   The pairings of Caitlin Fitzgerald and Susie Burke,  Michelle Keating and Joanne Quaid,  Caroline Maher and Kathleen Alton were winners by the 14th Hole to the thrill of Team Managers Mary Lyons and Susan Carey.

Ladies Captain Margaret Gill was delighted to accept the East Munster Pennant on behalf of the Team and the Club and complimented and thanked everyone involved in the success of the event.   Cahir Park are through to the All-Ireland Final of AIG Women’s Junior Foursomes to be played in Tramore G.C on the first week of September together with seven other Regional Finalist teams from the four Provinces.  Cahir Park also play Tralee G.C Women’s Junior Foursomes Team who are West Munster winners in a Munster Final to be played at Muskerry G.C. by mid-August.

No time to recover for the Cahir Park Ladies!

The All-Ireland Hurling Final was clashing as was the great 150th British Open at St. Andrews,  but all eyes were on Cahir Park Course which was in great condition despite sweltering sunshine.

A very strong Templemore team arrived and the matches were tight and hard fought throughout the afternoon.  The Ladies of Cahir Park were not out for defeat and pulled energy and strength together to enjoy fantastic success.  Caitlin Fitzgerald,  Joanne Quaid and Caroline Maher duplicated success over the two days.  Kathleen Lonergan and Susan Carey added to the victory with Kathleen winning on the 18th and Susan called in after the 15th dormy 3.  The team Managers Cathy O’Gorman and Mary Lyons were ecstatic with joy and now await word of opposition for the East Munster semi-final round.

On the day our 2017 Lady Captain Rosemary discovered a newspaper cutting from the Nationalist of June 1992 covering an Open Day and ‘a new format of a three-ball team competition’, Cahir Park Ladies hosted the first ‘Play in Pink’ day of the Club.  Pink was truly the colour of the very successful day. The Champagne Scramble was very kindly sponsored by David Ryan, Golf Professional and Rosaleen and Frank Fitzgerald of Garrabridge Ltd.  With Ladies resplendent in the forty shades of pink, teams arrived from far and wide to the delight of the Ladies Committee who organised a superb day.

On presenting the prizes, Ladies Captain Margaret Gill thanked all the Ladies who travelled from local and not so local Clubs and all the Club Ladies who played.   Margaret thanked the very generous Sponsors of the Champagne Scramble Competition.  Margaret thanked all who donated raffle prizes and Murphy Candles for providing beautiful candle Hamper prizes for the Raffle.   She thanked all who had contributed to the raffle , the Course Team for their excellent work, the Restaurant and Bar Team and the ProShop team, all of whom made the day the success it was .

Results of ‘Play in Pink ‘ Day:

Congratulations to all and a big thank you to all the visiting teams, especially Edenderry G.C. ladies.

Congratulations to Fiona Rea who won with 26 pts and welcome back to Linda Harris who was second with 19 pts.

A very successful week for the Ladies of Cahir Park and Congratulations to all Team members and Managers.   Thank you for your commitment and time to the Club.

Well done to the Cullen Cup Team who recorded good success over Curragh Golf Club last weekend and now go on to the next round v Bray G.C. with match to be played mid August.

Diageo Mixed Foursomes Team recorded another success on Thursday evening over Mitchelstown G.C.  News of next leg of competition awaited.

Cahir Park team of Emmet Leahy and Peter Meaney, Gary Morrison and Niall Morrison battled their way back into contention on Holes but success was not to be for them on the day.

Our ABP Open Singles Qualifiers continued Tuesday the 12th July to Thursday the 14th July 2022. Category 1 was won by Shay Hughes playing off 5 and scoring 35 points. The Category 2 prize went to Martin Fanning playing of 13 and returning a solid 40 points. Next up in Category 3  William Dillon shot 41 points playing off 16 to win his category. In Category 4 saw the highest score of the week with Peter Browne returning 44 points playing off 23. Well done lads.

The men’s section held an 18 Hole Open Singles Stableford from  Friday 8th July to Sunday 10th July 2022.  The results where as follows: